The Winckelmann Museum in Stendal

Johann Winckelmann is seen as the founder of classical archaeology and modern art history. In 1768, he was the victim of an insidious murder. In his birthplace of Stendal, a museum is dedicated to the great scholar of antiquities and his work.

Johann Joachim Winckelmann created a new view of antiquity and influenced the literature of German Classicism. His view of antiquity, characterised by longing and love of freedom, made an essential contribution to making ancient art and culture a vital and ultimately a personal experience.

Winckelmann worked in Italy, visited the ancient sites in Paestum and Pompeii, collected material for his writings and, on behalf of the Italian Cardinal Alessandro Albanis, designed the programme for the artistic decoration of the collection of antiquities in the Villa Albani. He was later appointed supervisor of all the antiquities of Rome by Pope Clement XIII. In April 1768, he left Rome for a trip to Germany, during which he became the victim of a crime on 8 June 1768, at a stopover in Trieste.

In the Stendal Museum, Winckelmann’s life and work is traced in 14 rooms. Room one focuses on Winckelmann’s murder, room three on the public reaction to the bloody end of the scholar in Trieste. The educated world was deeply shocked. The sculptor Antonio Bosa created a monumental tomb in the San Giusto cemetery in Trieste, and Winckelmann was honoured with busts and statues throughout Europe. 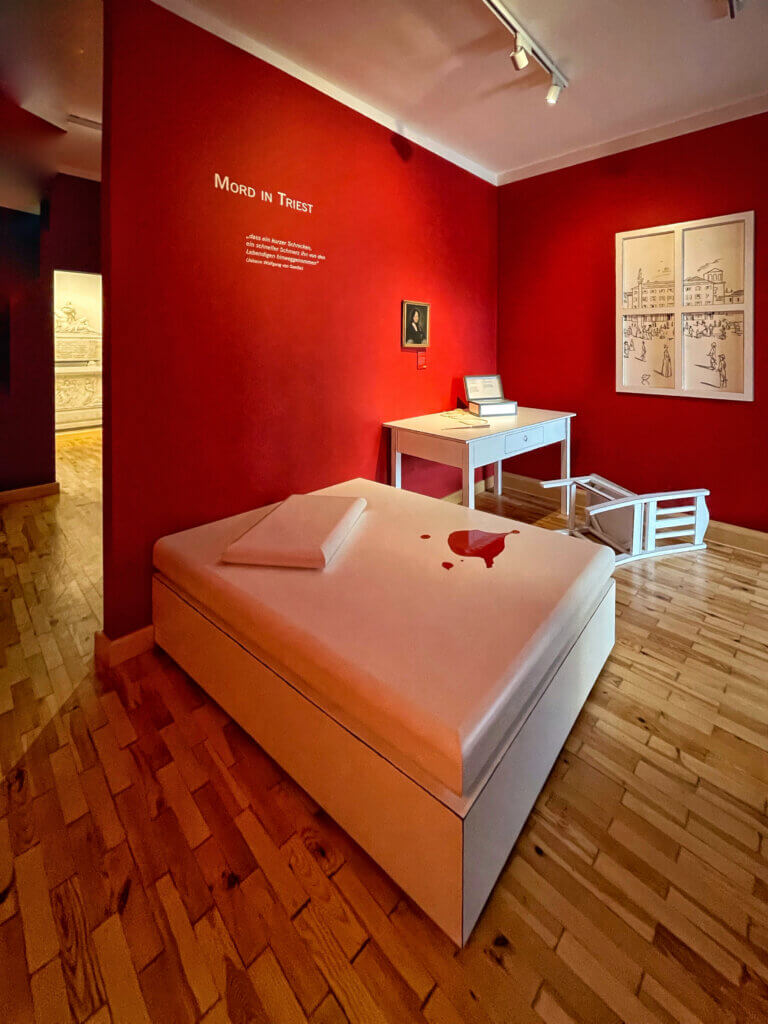 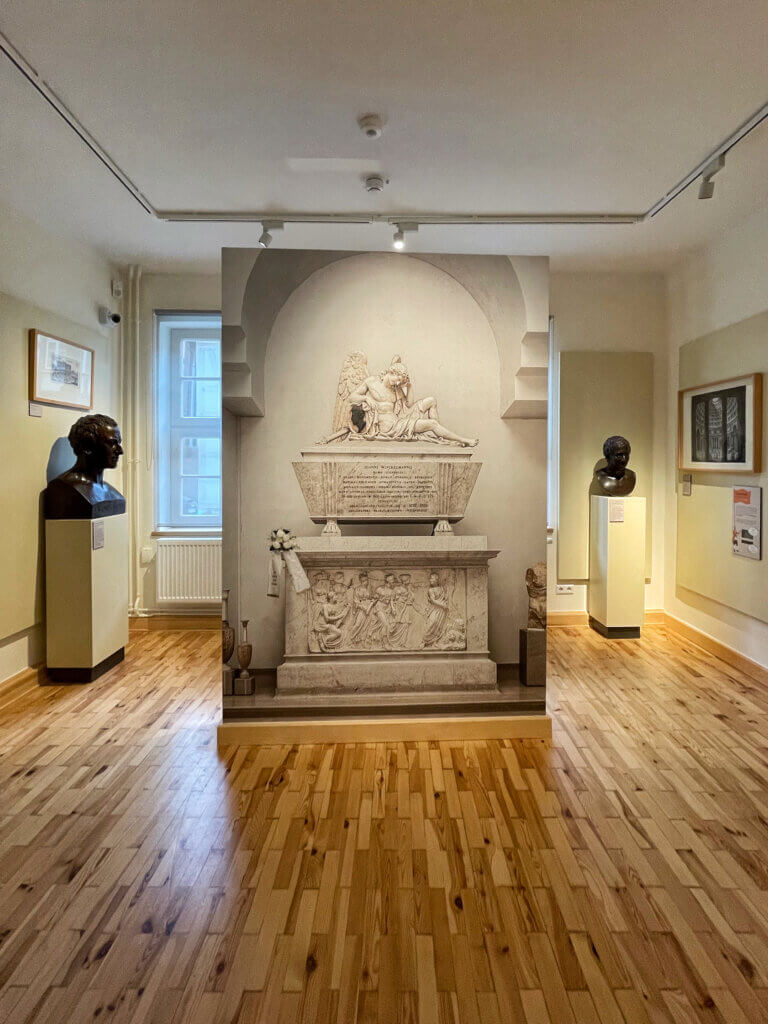 Before working in Italy, Johann Winckelmann lived in Dresden for several years. Here, in 1755, he wrote his first work, Gedancken über die Nachahmung der Griechischen Wercke in der Mahlerey und Bildhauer-Kunst, an enthusiastic description of the culture and art of ancient Greece. He understood his descriptions of the Laocoong group, which he had gleaned from ancient sources, as well as the statues of the Herculaneum Woman he had seen in the Dresden art collections, as a counterpoint to the courtly Baroque of his time.

In 1758, Winckelmann was the “first German” to see the three Doric temples in Paestum, south of Naples, and in 1759 he dedicated an essay to the temples of Agrigento in Sicily. This opened the way for an aesthetic reassessment of the Greek temples. In 1762, he published his Anmerkungen über die Baukunst der Alten, in which he wrote, among other things, about building materials, fundaments and wall constructions and dealt with the Greek and Roman systematic of columns.

In 1738, systematic excavations had begun in Herculaneum, and in 1748 in Pompeii. Winckelmann made his first trip there in 1758 and was then allowed to visit the excavations during his second trip in 1762. Winckelmann also reported on the ancient wall paintings from Herculaneum and Pompeii. These then triggered enthusiasm throughout Europe; numerous castles were furnished with motifs from the ancient frescoes.

Among the antiquities held in high esteem since the Renaissance are the Laocoongroup, the Torso (the fragment of an ancient statue of a seated person) and the Apollo in the Belvedere courtyard in the Vatican. Soon after his arrival in Rome in 1755, Winckelmann had seen the statues and described them several times, including in his major work Geschichte der Kunst des Altertums, published in 1764. The last room 14 in the Winckelmann Museum exhibits replicas of these famous statues from the Vatican. 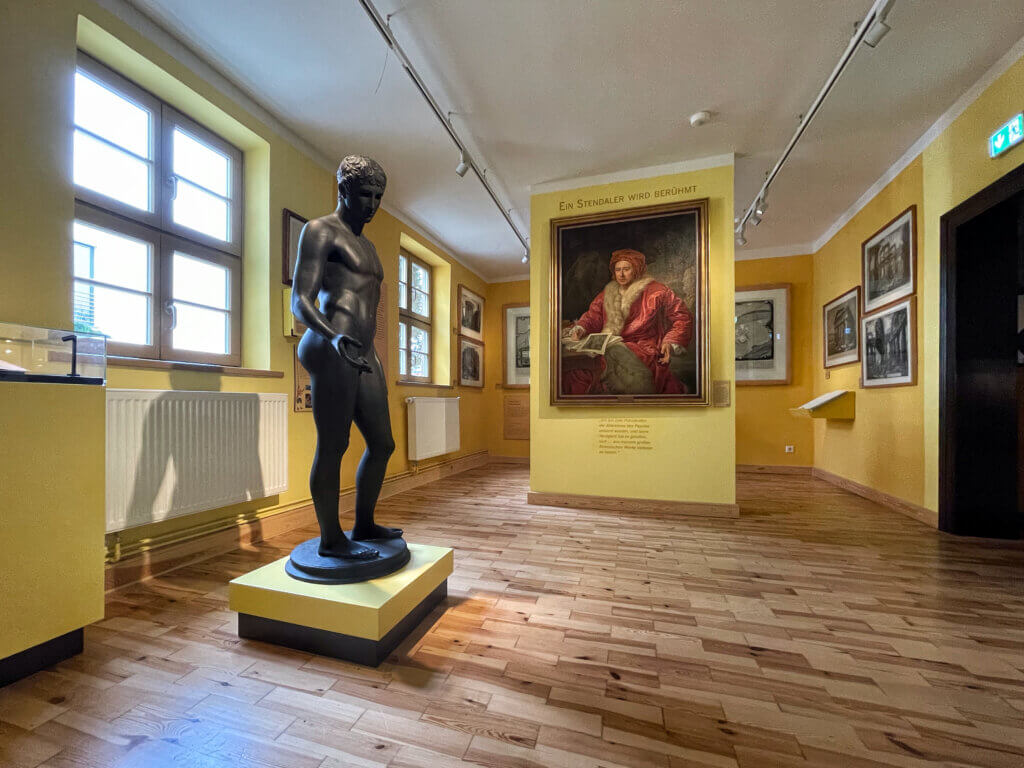 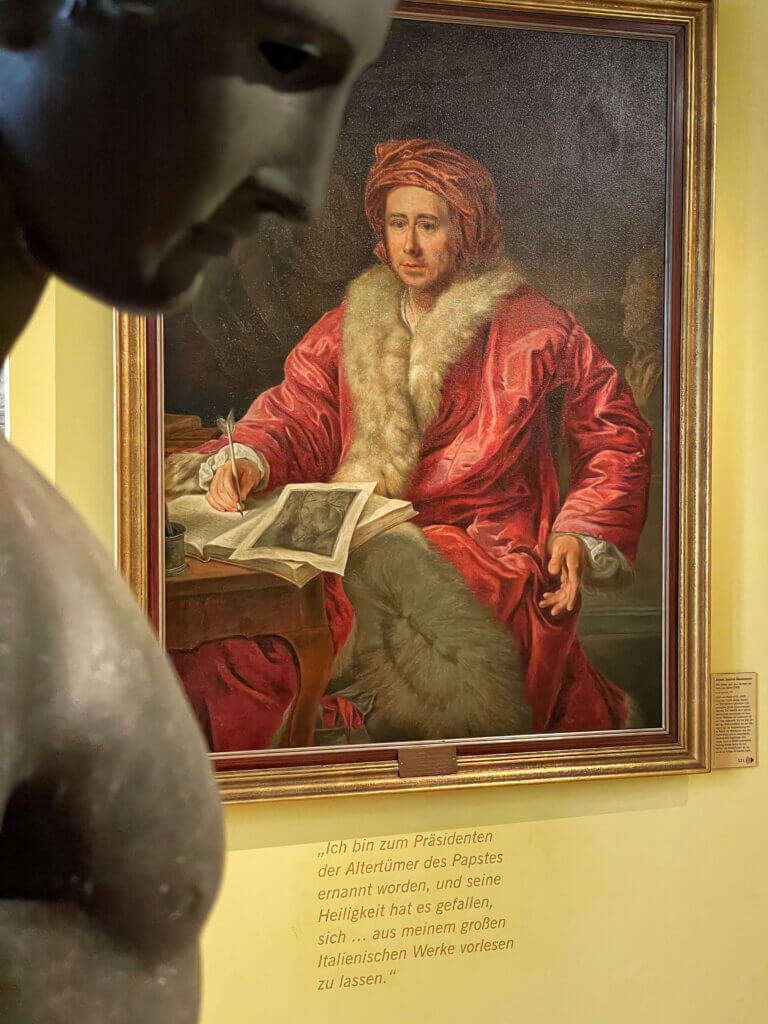 Winckelmann was a prominent figure and was portrayed during his lifetime, among others by the then 22-year-old painter Angelika Kauffmann in 1764 and by the Austrian portrait painter Anton von Maron in 1768. Maron’s painting depicts Johann Winckelmann in his housecoat with Russian wolf fur and silk scarf around his head. The oil painting on canvas in the Winckelmann Museum is a copy from 1956.

The Winckelmann Museum was opened in 1955 on the site of his birthplace, now 36 Winckelmannstrasse. Within a good 60 years, but especially since the year 2000, when the Winckelmann Society took over the management of the museum, the area has been gradually extended by including adjacent buildings and areas. On the occasion of the Winckelmann jubilees in 2017/2018, a comprehensive structural redesign took place. The Winckelmann Society was founded in 1940 and is now a non-profit association with 600 members from 20 countries.

Since 2003, a wooden Trojan horse weighing about 45 tonnes has been part of the Winckelmann Museum. The 15-metre-high figure was made for a large Troy show in Lower Saxony and then brought to Stendal. Since August 2020, it has been accessible again after extensive renovation and offers a beautiful view of Stendal.

Since June 2021, visitors have been able to learn more about Johann Winckelmann’s life in Stendal via the so-called Winckelmann Trail. It was made possible with the support of the local community foundation.