The Saalburg is the most completely reconstructed Roman fort of the entire Limes. Since November, the unique collection of reconstructed ancient artillery has been on show in a newly designed exhibition area.

Around the year 90, the Romans built a small fort near today’s Frankfurt/Main to secure the border to free Germania. About 50 years later, the base was expanded into a cohort fort made of stone. The garrison, which was presumably under the legionary command in Mogontiacum, was the Second Raetian Cohort. In the middle of the third century, the Romans abandoned the area on the right bank of the Rhine. After the end of the Upper Germanic Limes, the ruined fort was used as a quarry.

The first excavations began in the 19th century and from 1900 to 1907 the reconstructed fort was built as it exists today. The complex offers a nearly original impression of a Roman fort on the Limes. The Saalburg Museum and a research institute have been set up inside. In 2005, UNESCO inscribed the Upper Germanic-Raetian Limes, and thus also the Saalburg, on the World Heritage List.

The Roman fort of Saalburg is located at an altitude of around 400 metres on a ridge of the Taunus Mountains on the national road 465, one to two kilometres from Bad Homburg in the forest. The fort is part of a roman landscape. In ancient times, the fort was surrounded by the houses, temples and public buildings of the civil village. Today, the ground walls of roman buildings and reconstructions from the time of the rebuilding can be seen. To the south of the fort are the Temple of Mithras, the Tomb House and the column of Jupiter. On the northern side of the circular route is the Limes passage with a reconstructed piece of the palisade. 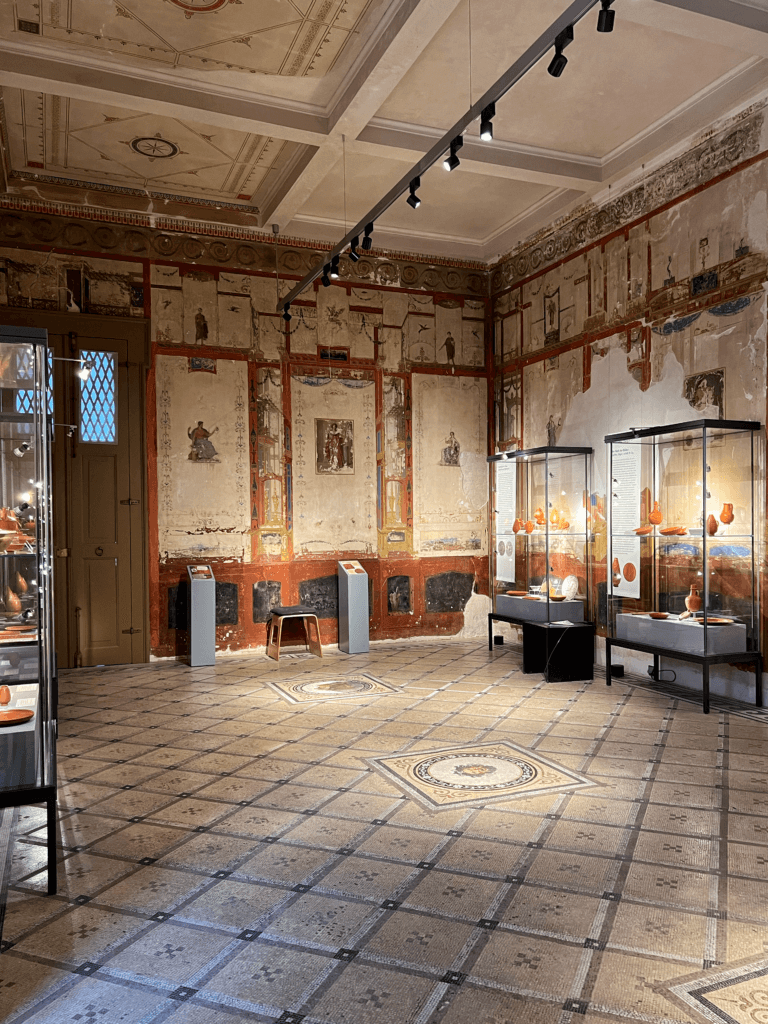 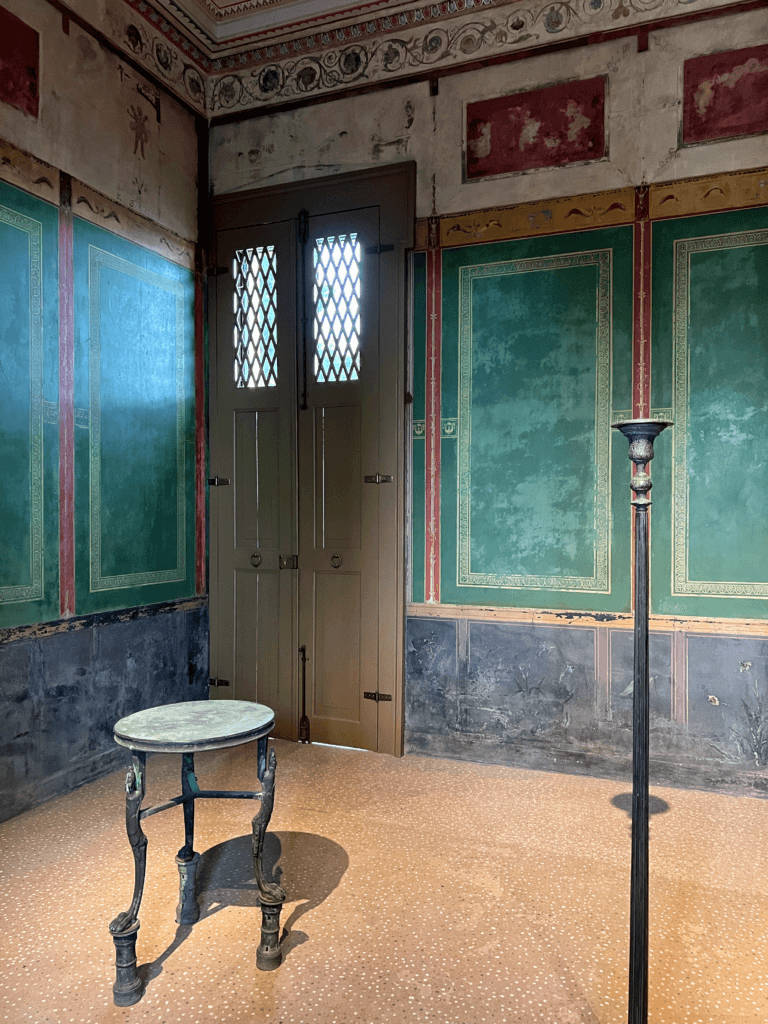 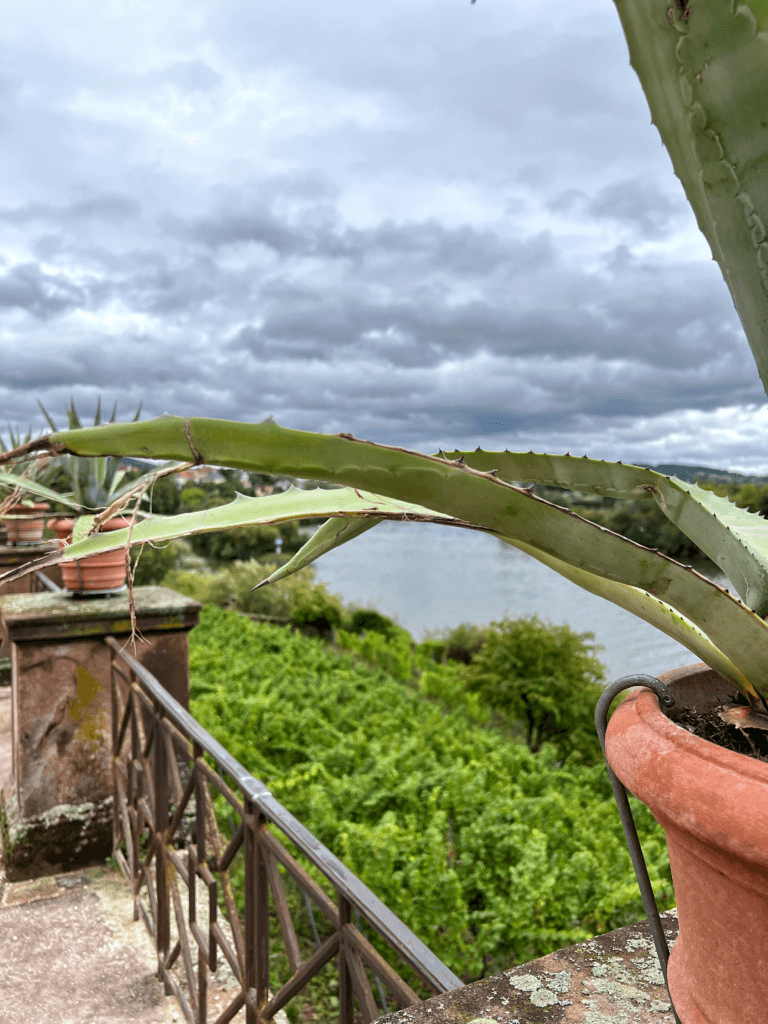 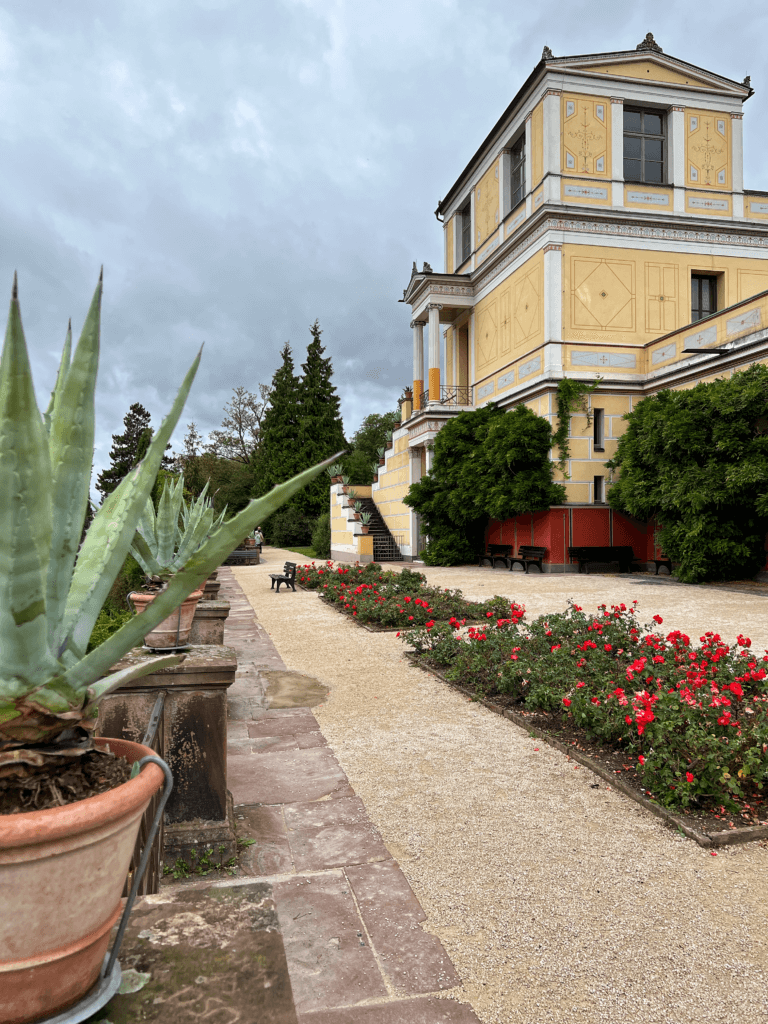 Since November of this year, the Saalburg Roman Fort has a new attraction for its visitors: the armoury, the so-called Armamentaria, has been redesigned. Here you can see the world’s only collection of reconstructed antique artillery. In addition, visitors can learn more about the fort’s garrison. Ancient findings, two life-size soldier figures (and a horse) and 600 small plastic Romans illustrate barracks life.

The highlight of the armoury are the heavy weapons of the Romans. Such torsion guns draw the energy necessary for firing from the twisting of rope bundles that occurs during cocking and the resulting elastic deformation of the surrounding frame. The illustration on the wall shows the dimensions that ancient artillery could assume. Smaller types, some of which could be carried and fired by a soldier or mounted on a tripod similar to modern machine guns, are exhibited as reconstructions. The oldest replicas are already 120 years old themselves and were made at the time by the Prussian artillery colonel Erwin Schramm with the promotion of the German Emperor Wilhelm II. 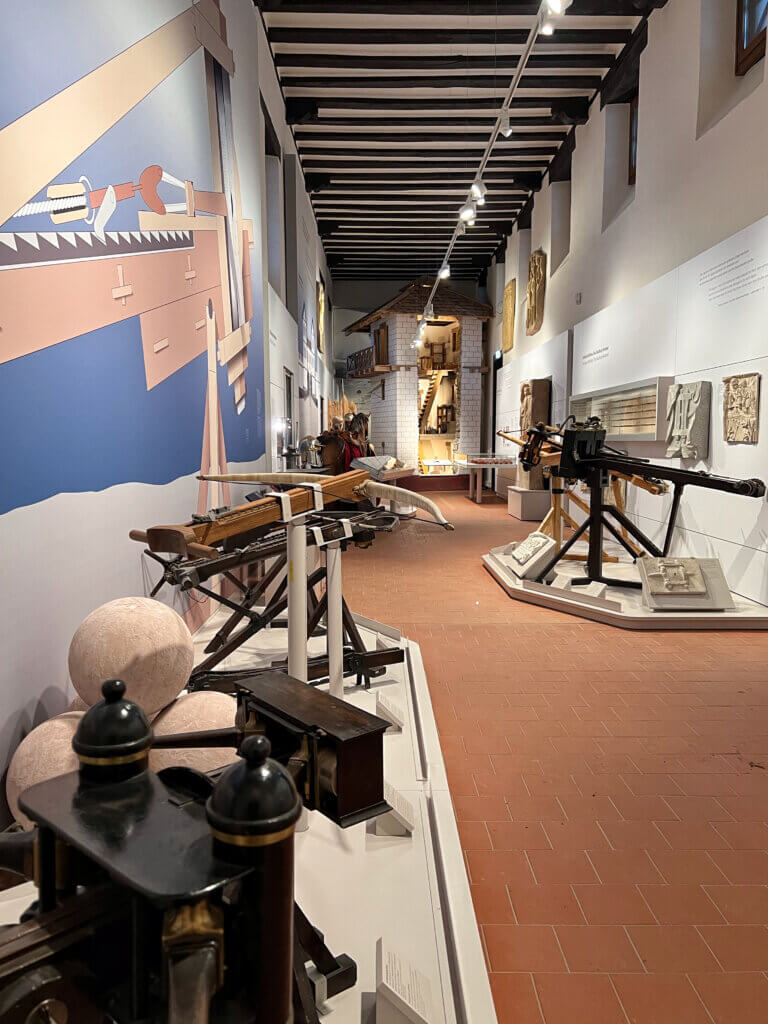 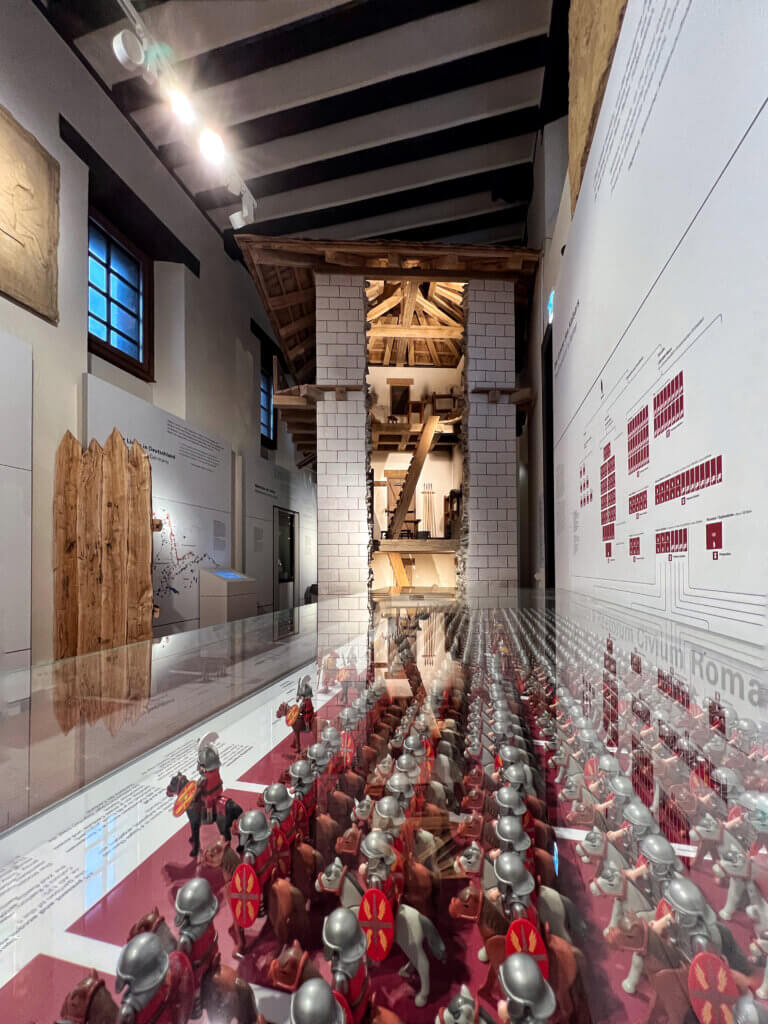 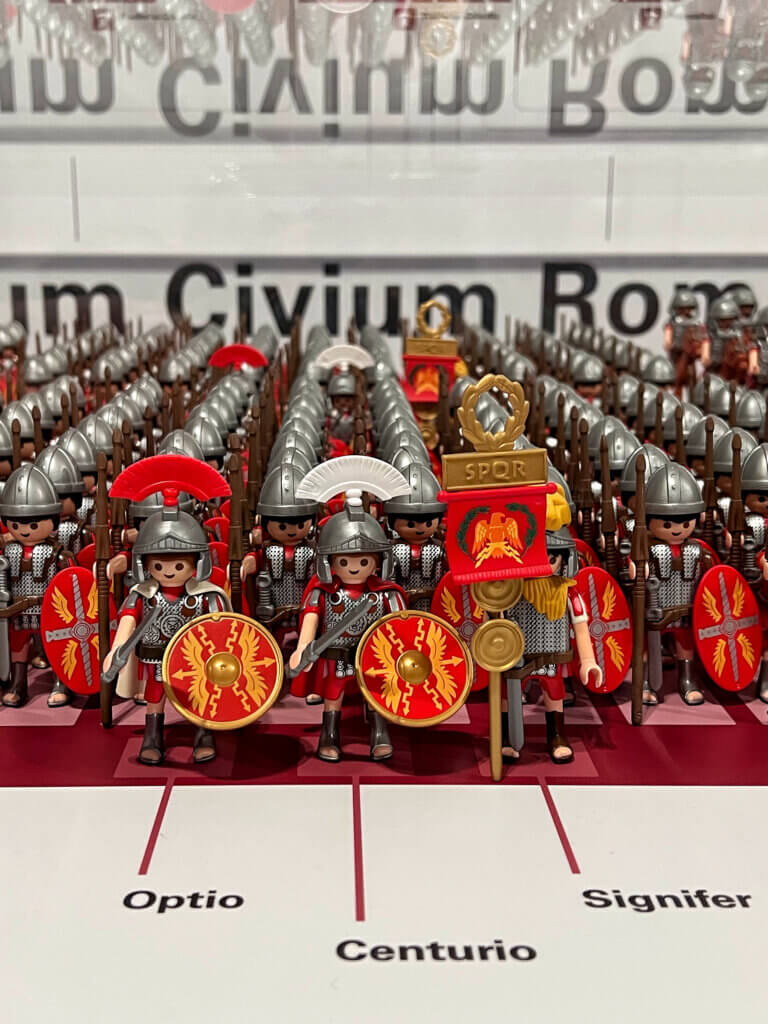 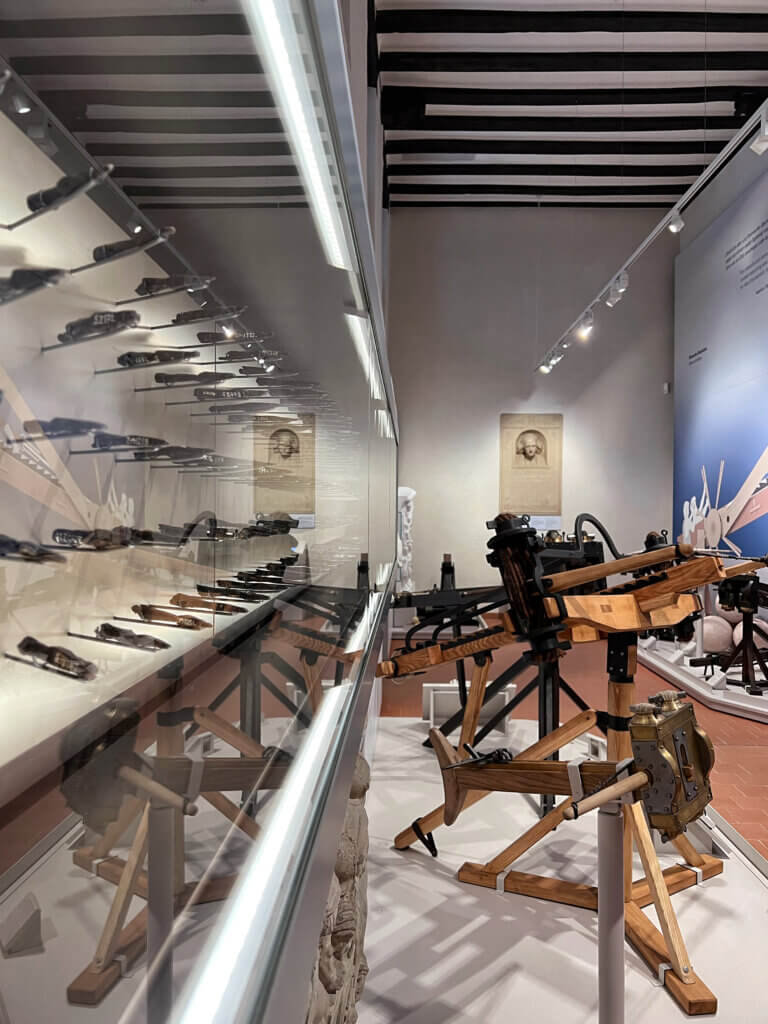 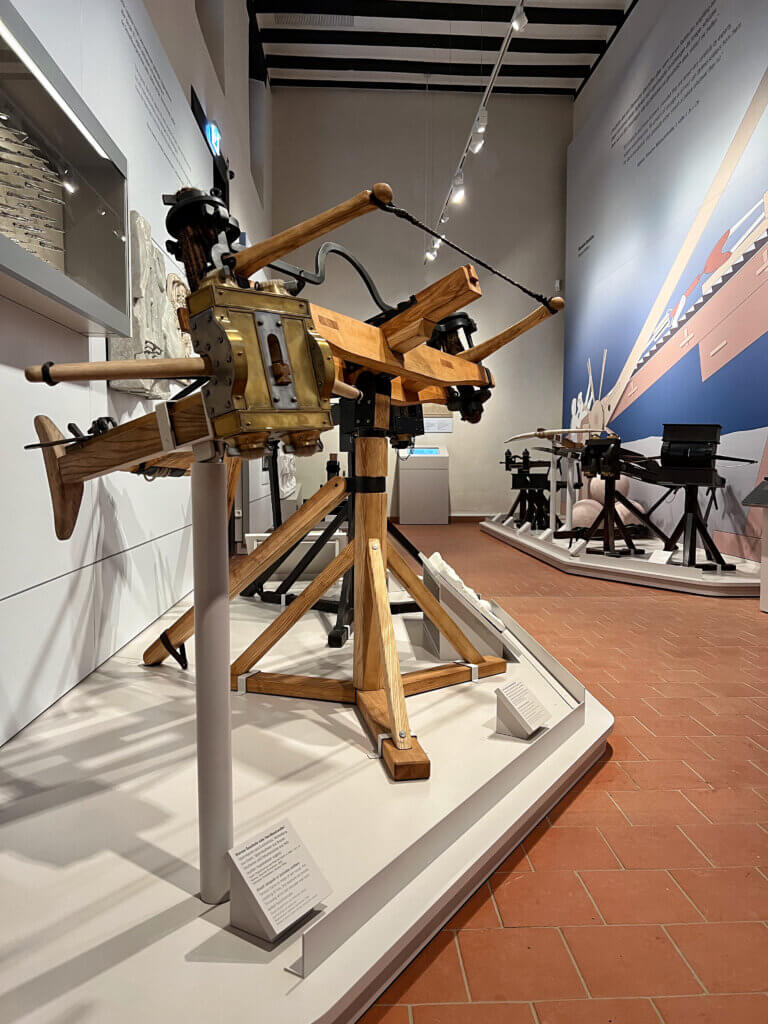 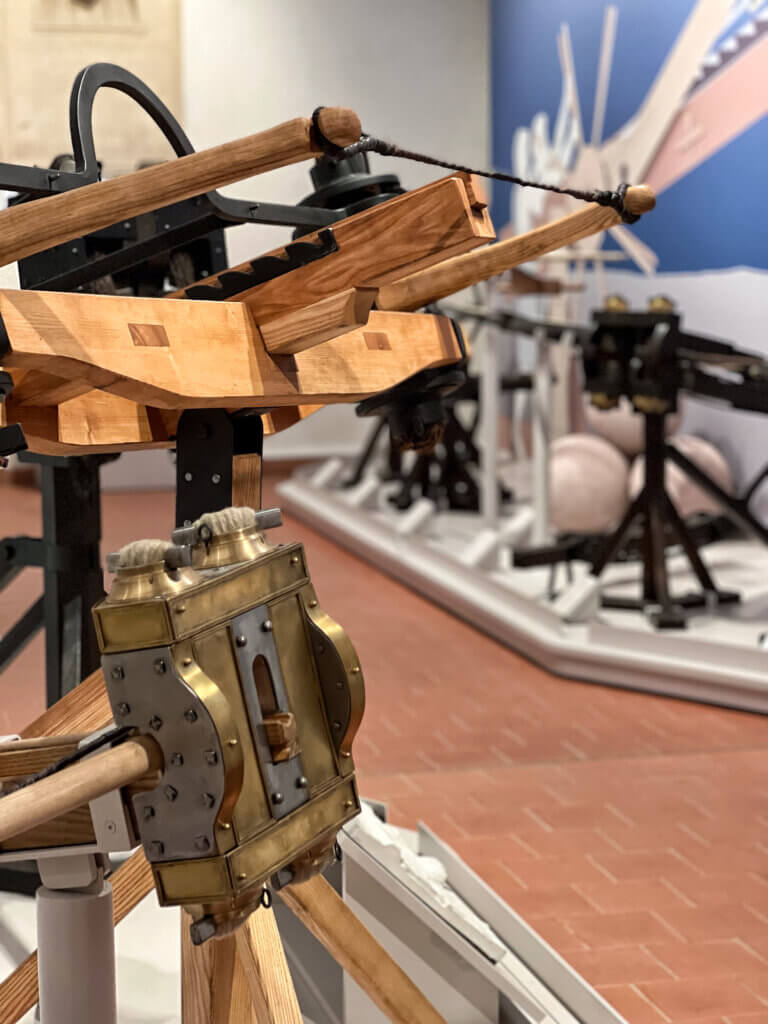 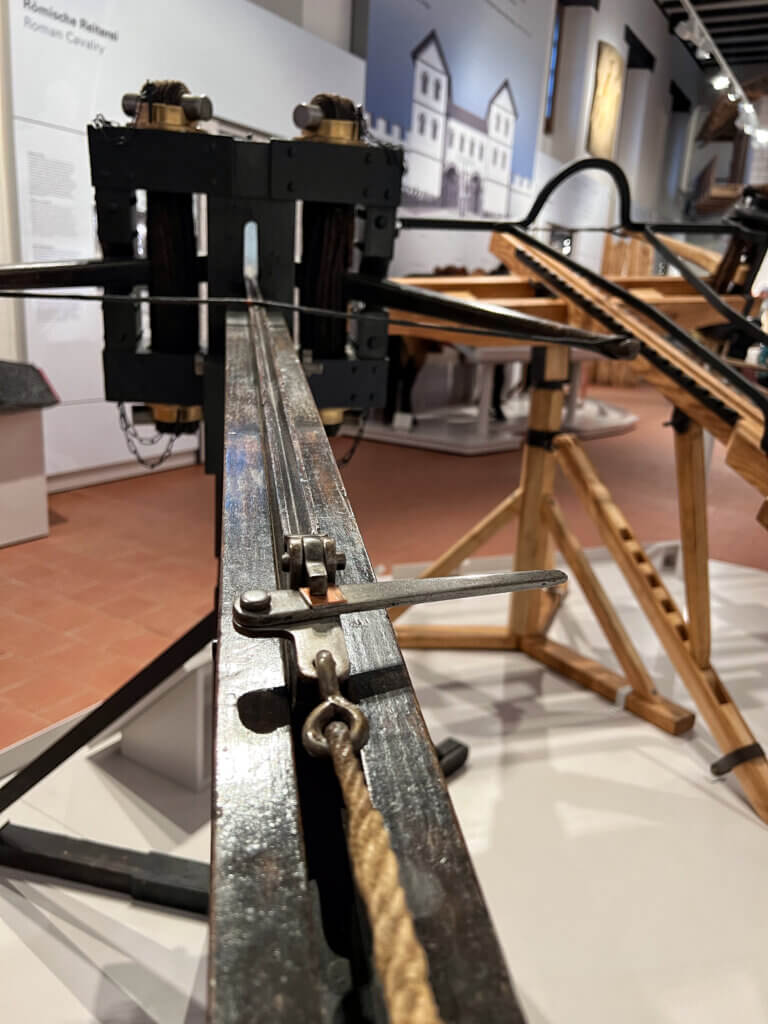 In addition to the old replicas by Erwin Schramm, there are also reconstructions by Alexander Zimmermann from the last 20 years. With the discovery of the battlefield at the Harzhorn between the Romans and the Germanic tribes, the study of ancient artillery has received renewed interest, including media interest. The video production Death from Nowhere: Ancient Guns provides insights into the functioning and effectiveness of Roman artillery.

In the southern surroundings of the Saalburg is a civil monument in honour of the Roman god Jupiter. The Jupiter column was erected at the beginning of the 20th century as a further attraction for the newly reconstructed Saalburg Roman fort. The stone column is a copy of a monument from Mainz. Only a few pieces of the statue of Jupiter made of gilded bronze that crowned the monument have been found. It was reconstructed according to better preserved models.

Older photos of my visits to the Saalburg can be found here and here.

The Saalburg Roman Fort is easy to reach from Frankfurt/Main by S-Bahn to Bad Homburg and from there by bus.